✕
I've made a game for iPhone, it's called Rebounder. This is a series of blog posts about it.

Unity provides a very high level environment for making games, however that doesn't make it simple. Unity is a huge package with a steep learning curve for someone with no experience of making games. In addition to this it's not just Unity I was learning. Each plugin must be learned and I used several including 2D Toolkit, NGUI, Game Analytics and iTween. All but iTween required a significant time investment to get up to speed with.

Fortunately there are many great resources for learning Unity.

There are a bunch of different aspect ratios being used by various phones on the market. Usually this isn't a problem. For example a 16:9 iPhone 5 will simply show a bit more on the left and right when compared with a smaller 3:2 iPhone 4 screen. Unfortunately the core gameplay mechanic of Rebounder is angles so that extra bit of screen means that sometimes a solution that will work in one aspect ratio won't work using another. The problem gets worse as the number of aspect ratios increases. This is one of the reasons I decided to stick with iPhones and avoid Android devices.

In my head this problem could be solved by using some clever maths to calculate the angles required and adjust elements of the level accordingly. One small problem, I'm not that clever. Another solution I came up with involved attaching a script to each target that stored positions per aspect ratio. So the co-ordinates could be (-10, 10) for a 16:9 screen and (-8, 10) for a 3:2 phone. I binned this solution because most of the levels worked fine in various aspects so I was duplicating lots of co-ordinates.
My final solution was the simplest. If a level worked in all aspect ratios it would be loaded as normal. If a level was different for each aspect ratio the level name would include the aspect ratio. E.g. Level2-16by9 and Level2-3by2. The aspect ratio would be calculated when the game started up and appended to the level name where appropriate.

Unity3D is primarily a 3D graphics engine. No really, it's in the name. When I started development Unity did not have:


Fortunately a great plugin exists called 2D Toolkit which has all of these features. Probably the most useful feature I found was the Sprite Collections. 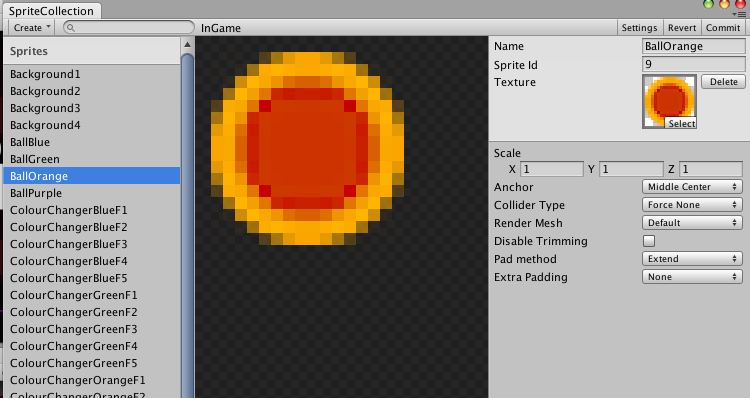 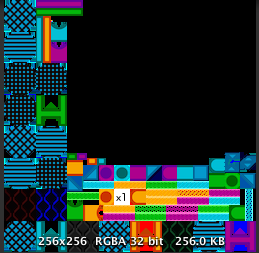 Even better, for each sprite in the collection you can specify things like anchor position, the which point it rotates around; and the collider type, such as sphere, box or you can draw your own. If that wasn't enough 2D Toolkit also supports different resolutions so you can display sprites of an appropriate size for the device. For example x1 on iPhone 3, x2 on iPhone 4 and iPad 1/2 and x4 on iPad Retina.
The only feature I wasn't impressed with was the GUI system. For that I used NGUI. It's not cheap but worth it if you need a complex GUI or can pick it up in a sale.
I've only scratched the surface of what 2D Toolkit can do in this blog. Without it I'd probably have given up way before Rebounder was finished.

I've never made a game before, I've never been involved in any game development and making games is really, really difficult. Because of this I went through periods of time when I thought creating a game was incredibly exciting and periods of time when I thought what the hell am I doing, this is a complete waste of time.
What kept me going was taking breaks when I got very frustrated/bored/despondent and taking encouragement from positive feedback I received from friends having played Rebounder.

Making a game takes time. I, like every other software developer who ever lived, massively underestimated the time it would take to complete all the tasks and massively overestimated what I thought I could achieve. At some point I stopped and thought, this is getting ridiculous, I'm never going to finish, I need to cut down my work. So I did.
I used Trello to organise my tasks. I divided my remaining tasks into two lists, one contained nice to haves and the other required tasks without which I wouldn't have a game. I ended up sacrificing:
If I hadn't done this I'd still be working on Rebounder now, with no end in sight.


Next blog post - I've made a game - what did I learn?
Tags: indy game unity3d c# mobile development